Posted on August 2, 2017 by stingerbuzzz

It was February of this year, when I received the text message, “This is a longshot, but do you want to join our team to climb Denali in June?” My heart immediately started pounding. This was a dream come true for me, and my answer was YES! The next few months were a whirlwind of training and gear hoarding. I’m a trail runner with some winter mountaineering experience; however, I had a lot to learn and needed a lot of gear. The mountaineering community was very generous!

Denali Day 1, June 4th: We took off for Talkeetna, Alaska, with 830 pounds of gear in tow, boarding a single prop plane for our flight to the Kahiltna Glacier at 7,200’. Upon arrival, we loaded up sleds and backpacks, strapped on our snowshoes, and started traveling. Our sleds and large backpacks made for an extremely heavy load!

When we arrived at camp at 7,800’, we noticed a helicopter flying in. We were later informed that the helicopter was in the middle of a crevasse rescue, taking 15 hours to rescue a man that had fallen 60’ down. An air chisel and blow torch were needed to free him, and he was lucky to survive!

Denali Days 2-11, June 5th-14th: Over the next several days, we methodically moved our way up the mountain from 10,200’ camp to 11,000’ camp, and then up to 14,000’ camp. We climbed Motorcycle Hill, Squirrel Hill, Windy Corner, and encountered many crevasses. Although the days were long and difficult, I was always in awe of the beauty around us. At 14,000’ the sky opened up to amazing views of Mount Foraker and Hunter and the surrounding peaks. We could see the different routes up Denali, including the West Buttress Route we intended to climb.

Reaching camp at 17,000’ our backpacks were very heavy with all of our summit gear, but I was stoked.
Despite a bit of altitude sickness, this was the highest I’d ever been!

Denali Day 12, June 15th: Summit Day…..We waited for the weather to subside, but the wind failed to die down. Half of our team was leading the way ahead of us when, near Denali Pass, the wind was so bad they had to turn around. We all hiked back to camp together at 17,000′ and settled in, with the wind whipping and the temperature dropping to -20 degrees. The next morning we learned that a team of 3 from Nepal made it to the summit. On the way down, one of them collapsed 6 minutes from our camp and died. He was only 28 years old, and Denali would have been his 7th of the Seven Summits. He paid the ultimate price!

Denali Day 13, June 16th: The next morning we woke to snow and to teams packing up to head down in low visibility, so we joined them and climbed down to 14,000′ to evaluate our situation. The forecast wasn’t looking good for the next several days, and we heard that the crevasses were opening up down below.  The decision was eventually made, we would pack up camp and head down the mountain in one push.

Denali Day 16, June 18th: I felt torn about leaving without our summit – we all did. For two on our team, this was their second attempt. But with the threatening forecast on the horizon, we packed up and left 14,000’ on Sunday afternoon and hiked all night to get back to Base Camp around 5:45am. We were on our way back to civilization, and a hot shower sounded so good!!!

Denali was an absolutely amazing experience! I was blown away by its beauty and humbled by its fury.  I realize now that it’s not always about the summit but about the experience and friendships you make along the way. I will always cherish this experience and the things the mountain taught me. Hopefully, I will have the opportunity to return to Denali someday. Until then, I’ll be exploring and climbing new summits! Happy 100th Anniversary, Denali!

*The summit success rate was 31% for the season, when we left Denali. 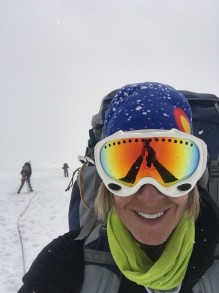